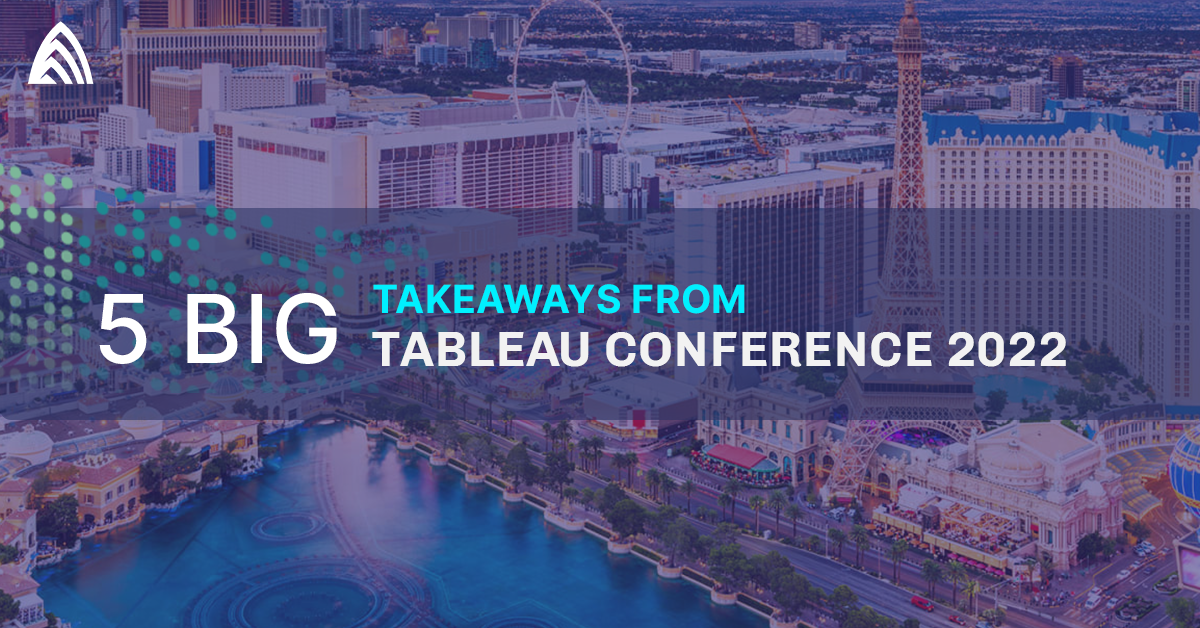 For the first time in over two years, the Tableau #datafam was back together in person for Tableau Conference 2022 (aka TC22). The annual conference, traditionally held in the fall, shifted to spring for 2022. Here are my five biggest takeaways from the week in Las Vegas.

As I’ve been known to say in the past: When the logo of the company who acquires you is a cloud, you should probably expect that things are going to shift in that direction. If there was one overarching theme from the week, I would say that it is a clear shift in long-term focus to Tableau Cloud from Tableau Server.

Salesforce and Tableau took advantage of the event to announce the rebranding of Tableau Online to Tableau Cloud — and to highlight a series of product enhancements that close some barriers to entry for Tableau Server customers to migrate. Most notable was the announcement of multi-site administration for Tableau Cloud, as well as easier embedding of Tableau Cloud in public sites or portals (no more messing with URLs or core-based licensing!).

Other highlights were extract encryption (and, perhaps more significantly, customer-specific encryption keys) and region-specific sites, facilitating compliance and performance for organizations spanning more than one country that cannot be done with on-prem servers today.

A path toward feature parity with CRM Analytics

Tableau-focused readers are probably thinking to themselves: Feature parity? Tableau is far superior! When it comes to depth and breadth visualizations, it most certainly is. But when it comes to AI and machine learning, CRM Analytics has a five-year head start. While original post-acquisition plans anticipated a gradual convergence into a single analytics product, Salesforce has backed off that plan, instead embracing a “better together” approach and a two-product strategy moving forward.

As such, popular features in CRM Analytics are now finding their way to Tableau. TC22 was the opportunity to reveal several of those, including:

More Predictions, and more “Data For Everyone, Everywhere”

As analytical solutions continue to evolve and embrace the power of AI and machine learning, Tableau is keeping pace. As noted previously, Model Builder brings this capability directly within the tool. I would anticipate near-future enhancements to Data Prep to build in things like sentiment analysis into the process of data ingestion; CRM Analytics already has this.

Tableau is also looking for opportunities to make visualizations even easier for everyone to understand. With the acquisition of Narrative Science at the end of 2021, they announced at TC22 a new feature dubbed “Data Stories,” which leverages the power of Narrative Science to analyze the insights present on a viz and translate them into a text-based, readable analysis of the results. As they said at the conference, “All of you speak data, but not everyone does; we wanted to make the data insights within Tableau accessible for as many people as possible.” Data Stories is currently beta in Tableau Cloud, and will be available for Tableau Server later this year.

As a side note, I’d get used to this: features hitting Tableau Cloud first, and in some cases, features being available only in Tableau Cloud.

The highlight of Tableau Conference is always Iron Viz, and this year was no exception. While the keynote may have differed from what we’ve come to expect from previous years (more on that in a moment), there was no shortage of excitement or passion for Iron Viz. A giant conference room packed with almost 5,000 attendees, each with bam bam sticks and full-throated support for the Iron Viz finalists makes for a distinctly different experience from watching online from the comfort of your home.

In this year’s competition, Will Sutton, CJ Mayes and Kimly Scott faced off for “The Most Exciting 20 Minutes in Viz” as they explored trends in global literacy. Will came out on top, and rightly so, although I loved Kimly’s personalization of her storytelling, and even after he explained it, I still don’t know how CJ created his “grape cluster map of Africa”!

While TC19 was technically the first in-person conference since the monumental Salesforce acquisition of Tableau, the ink had barely dried by the time TC19 took place in October of 2019 and most of the conference had already been planned.

As such, TC22 was the first time when in-person visitors could feel more of a Salesforce influence. Tableau Conference purists noticed a distinctly different feel from previous in-person events, both in terms of attendees (many people I spoke to were attending their first Tableau conference) and the overall tone and branding of the event (it felt more like a Salesforce event, as you’d expect).

Perhaps most noticeable was the familiarly passionate Tableau fans and newer attendees from the broader Salesforce ecosystem. For example, Iron Viz host Andy Cotgreave came out near the start of the keynote to help pump up the crowd. As he was calling out different groups of people and having them stand to be recognized, he finished with, “And stand up if YOU LOVE DATA!” In past years, there wouldn’t have been a butt in a seat; at TC22, about a third of the crowd remained seated.

What’s next for Tableau Conference? (And Tableau in general)

The overarching theme of the conference was Isn’t it great to be back together in person? and it certainly was. And while rumors have swirled around that Tableau Conference could be folded into one or more of the Salesforce conferences (e.g., Dreamforce, TrailblazerDX), Andy Cotgreave confirmed at the conclusion of Iron Viz that Tableau Conference will happen in the Spring of 2023. Until next year! But in the meantime…

Learn more about our Tableau consulting services and certified experts.